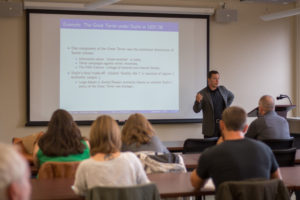 Paul Dower, an Assistant Professor of Agricultural and Applied Economics at UW-Madison and a Wisconsin Russia Project steering committee member, began the series of CREECA lectures for the 2017-2018 academic year with his talk: “The Value of a Statistical Life in a Dictatorship.” Dower and his co-authors determine how scientists might estimate the value of a statistical life (VSL) in a dictatorship. They structurally estimate the trade-off between monetary costs and fatality risk in the Soviet Union under Stalin’s regime. Using regional variation in the level of political victims during the Great Terror, this VSL is estimated to be approximately $43,000, 6% of the VSL estimate of US in 1940 and 29% of the modern VSL estimate in India. These findings are the first explicit attempt to measure VSL in a dictatorship and are a novel contribution to the debate on autocracies versus democracies.