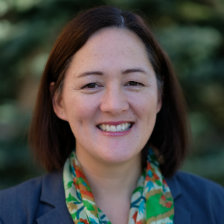 Yoshiko M. Herrera received her B.A. from Dartmouth College (1992) and M.A. (1994) and Ph.D. (1999) from University of Chicago.  She was on the faculty at Harvard University in the Government department from 1999-2007 and currently is Professor of Political Science at UW-Madison.  From 2011-2014 she was Director of CREECA, and from 2012-15 she was co-Director, International Institute (now Institute for Regional and International Studies) at University of Wisconsin-Madison.  She is currently Director of the UW-Madison Partnership with Nazarbayev University in Astana, Kazakhstan.

She teaches courses on comparative politics, social identities, and politics of the states of the Former Soviet Union.

Her first book, Imagined Economies: The Sources of Russian Regionalism (Cambridge University Press, 2005), examined the relationship between economics and regionalism in movements for greater sovereignty among the Russian regions of the Russian Federation.

A second book and collaborative project with Rawi Abdelal, Alastair Iain Johnston, Rose Mcdermott, and Will Lowe, focused on measurement of social identities.  This project resulted in an article, “Identity as a Variable,” Perspectives on Politics, 2006, 4:4 (December), pp. 695-711; an edited volume titled, Measuring Identity: A Guide For Social Scientists, published by Cambridge University Press in 2009; and a content analysis, program, the YOSHIKODER.

Herrera’s third book, Mirrors Of The Economy: National Accounts And International Norms In Russia And Beyond, was published by Cornell University Press in 2010.  This book was an honorable mention for the 2011 Ed A. Hewett book prize, sponsored by the National Council for Eurasian and East European Research (NCEEER), awarded annually by the Association for Slavic, East European, and Eurasian Studies for an outstanding publication on the political economy of the centrally planned economies of the former Soviet Union and East Central Europe and their transitional successors.  Mirrors of the Economy analyzes the variance in implementation of the UN’s System of National Accounts (SNA), and in particular the success of post-communist countries in implementing the SNA. The SNA is the basis for all national economic data including GDP and is therefore critical for economic policy and policy assessment.

Current research focuses on US-Russian relations, xenophobia in Russia, jazz and race in Russia, identity and the stability of the nuclear Non-Proliferation Treaty (NPT), formal models of identity and international security.