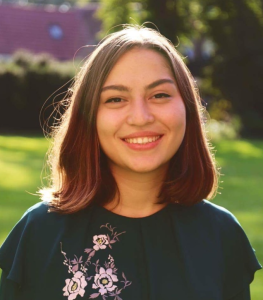 Yulia Khalikova is a Wisconsin Russia Project 2021-2022 Postdoctoral Research Fellow at the University of Wisconsin-Madison.

Her primary research focuses on the role of law and judicial institutions in authoritarian regimes with an application to Russia. Within this paradigm, she addresses such topics as judicial behavior and dissenting opinions at the Russian Constitutional Court, self-legitimacy of lawyers, and citations to international law by domestic courts. Her collaborative projects explore how autocrats legitimize their rule by abusing international concepts, and how the prospects of political change influence individual behavior in Russia. Part of her dissertation research received a best paper award for junior researchers organized by the Standing Group on Law & Courts at the 2021 European Consortium for Political Research (ECPR).

She holds a MA in Sociology (2017) and Diploma in Law (2015) from the Higher School of Economics, Moscow. During her studies, she was a visiting student at KU Leuven, New University of Lisbon, and the International Center for the Study of Institutions and Development in Moscow.

How authoritarian courts use international law: Evidence from Russia

Until recently, the academic literature looked at international organizations as the promoters of democratization. With the rise of authoritarianism, however, it is clear that international institutions can be used to undermine democratic norms. Despite general resistance towards international order, modern autocrats often employ legal rhetoric and use international norms for regime legitimization. Peak courts are actively involved in these processes: by embedding their rulings in international norms, judges, I argue, contribute to the legitimacy of specific policies. I explore this argument in relation to the Russian Constitutional Court (RCC) and its usage of international law. Russia has long contested international order, but international law has always been an integral part of its domestic legislation. However, since 2015, the RCC has the powers to decide on compliance with the rulings of international courts. Using an original dataset of the court’s rulings between 1992 and 2019 (N = 629), I show that, with the consolidation of an authoritarian regime in Russia, the RCC has shifted its citation patterns. Compared to the 2000s, in recent years, judges fill their rulings with references to international law to justify the constitutionality of laws under consideration. Contrary to prior studies, my findings illustrate how international law can be repurposed and weaponized by authoritarian institutions. This study contributes to our knowledge of authoritarian politics and the role of judges in autocracies but also has broader implications for other countries in times when international law is blatantly violated.